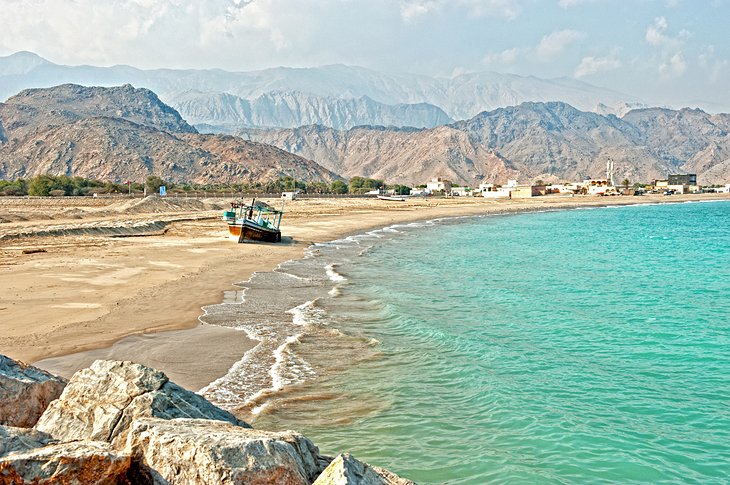 Fujairah is a very relaxing and quiet tourist location in the United Arab Emirates. Unlike its other Arabian counterparts of hustle and bustle and skyscrapers, Fujairah is a peaceful spot nested in the Hajar Mountains, laced with the coastline of the Gulf of Oman.

Here is your guide to the top tourist attractions in Fujairah.

Fujairah is home to a number of historic buildings, mainly forts and mosques.

It is the oldest fort of Fujairah, it was built in 1670. The ancient ruling family of Fujairah used to live in this fort. Adorned with architectural marvels, it has a number of halls, two round towers, and one square.

Walking down the stone hallways of Fujairah fort will surely take you for a trip in the history.

Sitting at a distance of 30 kilometers from the main Fujairah city in the Aouhlah village, this fort is a dose of Emirati heritage. Awhlah fort has been renewed and rebuilt to have a new, modern look while preserving its history. So, it’s a historical fort with a modern touch and naturally every tourist’s favorite.

Historically, Bithna Fort was a military fort set strategically to watch over all the important routes passing through the mountains into the valley.

This fort is particularly photogenic, having thick ancient walls and a circular watchtower. It is also home to the most beautiful scenic beauties as it looks over the palm groves of the villages of Fujairah and the rough mountain range.

Al-Hayl Castle was built almost 250 years ago, for defense purposes- to defend the country against any foreign attacks.

Again, it is a great historic site to visit.

The second largest mosque in the United Arab Emirates, the Sheikh Zayed Mosque is the ultimate portrayal of rich Muslim culture. The prayer hall of this mosque is said to accommodate more than 32,000 worshippers at a time.

Al Bidyah Mosque in Fujairah one of the oldest mosques in the UAE. This mosque is an architectural marvel of its own time.

Fujairah Museum is has a great collection of artifacts that were dug up at Qidfa and Bithnah during archeological researches. The artifacts include weapons from the Iron and Bronze Age, pottery, coins, and other vessels. The most popular art piece at this museum is a bowl made from the eggshell of an Ostrich, and that too some 2200 years back!

Fujairah’s beaches lie on the coastline of the Gulf of Oman. These beaches are home to snorkeling and scuba diving activities. The beaches are ideal to laze around and sunbathe as well. There are a number of restaurants, lounges, and cafes on the beaches as well.

The springs lie in the foothills of the Mountains of Hajar. Since Fujairah is a Muslim country, they have somewhat tight rules in place for bathing in these springs. There are separate bathing areas for men and women. Liquor is also not available here. These rules make these springs a family-friendly place as well, where you can take your children with ease. Ain al Madhab Hot Springs is an ideal place to unwind and have some “me” time.